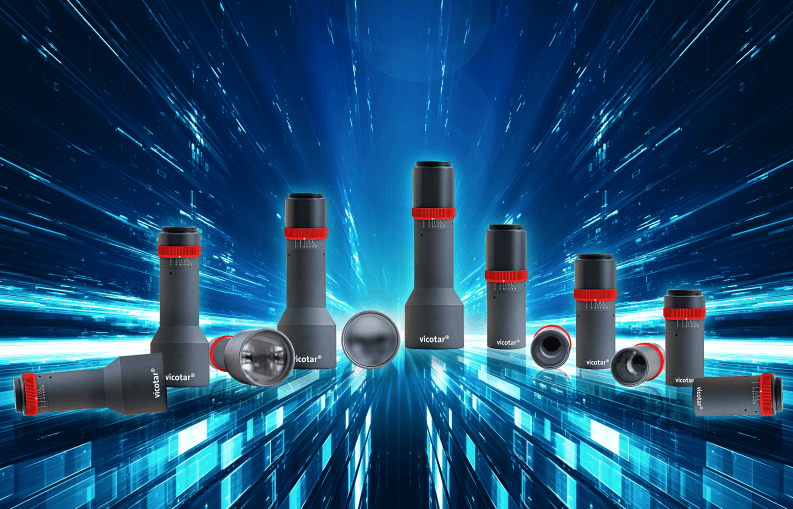 In industrial image processing, optical imaging is expected to provide high image sharpness with the greatest possible depth of focus. However, these are two parameters that in part exclude each other and often require compromises. Stopping down the lens to achieve the necessary depth of focus has the effect that the image becomes increasingly blurred due to diffraction. For example, for a specific lens with an aperture of 0.05 (corresponding to aperture value 10), a diffraction disk of 8 µm radius is created under red light (650 nm). If, on the other hand, blue light with a wavelength of 450 nm is used, the disc is reduced to 5.5 µm - a significant gain. In addition, the LEDs available today with a wavelength of 450 nm (Deep Blue) show an extraordinarily high degree of efficiency. If possible, work should therefore be carried out with monochrome blue light.

Our lighting systems are designed for these short wavelengths of 450 nm and offer good illumination even under difficult conditions due to their large power reserve (both in continuous light and flash mode).

The opinion is often expressed that monochromatic working enables the use of simple, colourless lenses. However, this is only true to a limited extent. An LED is not completely monochromatic, but has a half-width of about 20 to 30 nm. This appears to be very minor, but nevertheless produces a dispersion that is often not negligible. This causes both a lateral colour error (the magnification changes with the wavelength) and a longitudinal colour error (focal shift, the focus shifts). In the case of a non-corrected lens with an image scale of 0,2 and an object field of 15 mm diameter, colour fringes of more than 10 µm were measured at the edge of the image if the wavelength was changed by 20 nm. The outer pixels are washed out by this amount, which leads to considerable blurring. The additional longitudinal colour error also leads to blurring in the center of the image. This means that even when monochrome light is used, colour correction of the lens cannot be avoided. Colour corrections in the range of the entire visible light are connected with high effort. In most cases, the correction is realized for two wavelengths within the respective spectrum and certain zone errors are allowed in between. At the edges of the corrected spectrum, the error usually increases steeply again - and this is precisely the favourable range between 450 and 480 nm.

In this context, the idea was obvious to develop a series of lenses that would do justice to this circumstance and have a colour correction in the blue spectrum. Initially, two series of telecentric lenses with an object field diameter of 18 or 30 mm were developed. The reproduction scale of the individual lens types was selected so that the usual sensor sizes are used to the full. Thus, the diagonals of the image field are 4.1 mm (1/4"), 6.1 mm (1/3"), 9 mm (1/1.8") and 11 mm for 2/3".

The emphasis of the colour correction was put on approx. 470 nm. Thus, in the range from 450 nm to 490 nm, only very small longitudinal chromatic aberrations of 10 µm occur, which are below the detection limit.

Particular emphasis was placed on low distortion (well below 1%) and compact design. For example, the vicotar® TO18/4,1-100-V-B lens is barely longer than a conventional entocentric lens. The wall thickness of the tubes is not thicker than required for stability (harsh industrial conditions) and continues Vision&Control's typical slim design.

Since the lenses have been specially optimized for the blue range, they can only be used to a limited extent for red and IR. It is therefore planned to develop an analogue lens series for the IR range.

The lenses have an adjustable aperture. For use under particularly harsh conditions, a vibration-resistant version is available with a fixed aperture and rugged lenses. With their small dimensions and low weight, these lenses are ideal for use in robotics.

The lenses are diffraction limited for aperture values from aperture 8 to 11 (type dependent) and therefore very suitable for 5MP sensors.

The lenses of the TO18 series have a tube diameter of 28 mm (aperture ring 30 mm) and can be locked to this size. Corresponding lens holders are available.

The TO30 series has a diameter of 42 mm in the front part, the rear part is identical to the TO18 series, so the same holders can be used.